This article examines post-study transnational mobility among Chinese graduates with degrees from British universities, against the backdrop of recent developments in global higher education, in international labour markets and in international migration policy. British universities host the second largest overseas Chinese student population, one third of non-EU students in the UK are from China, and China is the only country showing a significant increase in student numbers between 2012-2017. Recent articles in The Times in May 2019 repeatedly highlight the record-high Chinese students to the UK in the latest statistics and that the on-going China-US trade war is likely to channel more Chinese students away from the US to the UK.

While Chinese international student mobility and participation in overseas higher education have been extensively discussed, much less attention has been devoted to the transnational mobility of Chinese students following the conclusion of their degrees, in the context of their study-to-employment transition. However, with ‘credential inflation’ in China in recent years, the direct short-term benefit of a Western degree on individual’s socioeconomic mobility has undergone doubt and re-interpretation. While capital accumulation and transnational mobility still feature as a main drive behind students’ motivation, their expectations increasingly point to the potential of gaining overseas professional work experience and a wider transnational social network. Such an expectation necessarily prolongs the “study abroad” period. Young graduates are thus exposed to a constantly changing local and transnational socioeconomic environment during a particularly unstable stage of their lives. As a result, Chinese graduates in the 21st Century are faced with a more complex process in terms of capital accumulation and conversion at a transnational level, which in turn shape the outcome of their migration decisions and their socioeconomic status.

How do we understand the relationship between overseas education and transnational mobility (including spatial and social mobility) of these Chinese graduates? Recent data in The Times in 2019 show that non-EU students who stayed to work in the UK after their graduation earn more than their British counterparts in almost every subject. While the UK benefits from the tax paid from these earnings and the much-demanded skills contributed by post-study migrants, its current migration policy does not facilitate, but rather limits, overseas graduates’ employment opportunities. In China, overseas-educated returnees’ have an average salary higher than that of their China-educated peers. Nevertheless, according to a survey conducted by the Center for China & Globalisation, among the Chinese students who had returned and worked in China in 2017, 68.9% expressed great disappointment in their salary, and nearly half of the respondents felt that overseas education did not help their career.  Clearly, in both China and the UK it is difficult to assess the impact of overseas education on graduates’ mobility trajectory.

Our objective is to bring out the changes in graduates’ perception of education, migration and mobility in the context of both micro-level personal life stage development (e.g. significant life event transitions) and macro-level socioeconomic changes in host/home countries (e.g. global redistribution of employment opportunities). On the basis of our observation of various outcomes of study-to-employment transitions, we compare the understandings of mobility between those graduates who remained in the UK and those who returned to China, as well as different understandings of mobility perceived by the same individual at different stages of their study and migration journey.  Finally, we discuss how the fluidity and nuance of subjective perception on mobility shape individuals’ spatial mobility (and immobility) against the static, narrowing migration policy in the UK.

These findings have significant implication for debates surrounding British migration policy. Uncertainty about the future of British education in the context of Brexit, ongoing debates about the inclusion of international students in net migration figures, and growing calls for the government to provide an “expanded post-study work offer for overseas students” highlight significant tensions in British migration policy as to the current and future status of international students. Our article contributes to the resolution of these policy tensions in three ways.

First, British universities frequently use the term “student experience” as a marketing slogan. However, beyond the commercialised language of contemporary higher education, our findings articulate Chinese international students’ perception of “student experience”: the opportunity to study abroad becomes tied to the potential for multiple forms of academic, personal, and professional development. Post-education mobility in the host country is greately valued among the more recent (potential) students. There is an urgent need for immigration policy to recognise the factors that may render Britain a desirable destination for highly-skilled young migrants, particularly given the likely loss of highly-skilled migration from Europe post Brexit.

Second, our study has shown Chinese graduates’ decision-making processes when it comes to remaining in the UK after the conclusion of their studies. Recourse to the British public welfare system was not mentioned at all by our participants. This calls into question the narrative of immigrants’ troubling overreliance on the welfare system that has long informed a trend towards restrictive immigration policies in the UK.

Third, our findings contribute to calling into question the policy package that has sought to turn the UK into a hostile environment for immigrants. This policy package has extended border controls inwards, requiring extensive policing of all migrants’ activities on the part of landlords, health care providers, banks, and other institutions. As has been widely reported, many highly-skilled immigrants find themselves targeted and even singled out for deportation in the context of the hostile environment framework. In contrast, our study highlights how highly-skilled young Chinese people consciously choose to make Britain a home for their professional and personal development, thus contributing in important ways to British society. The hostile environment arguably risks undermining these contributions by destabilising the social position of immigrants such as the women and men who participated in our study. 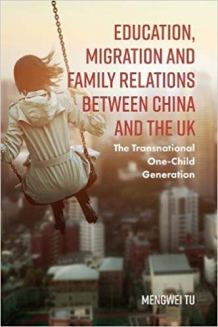 Dr Mengwei Tu is Lecturer in Sociology at East China University of Science and Technology, Shanghai. Her research is about international migration with a focus on education-related migration from and to China. She explores China’s role as a migrant-sending and migrant-receiving country as well as how individuals navigate education, career and family relations across borders. She is the author of book Education, Migration and Family Relations between China and the UK: The Transnational One-Child Generation (Emerald, 2018) and several articles in international journals such as Children’s Geographies and International Migration. Currently she is leading a project “Students/graduates form Belt-and-Road countries in China: migration network and career trajectory” funded by the National Social Science Fund in China.

Dr Daniel Nehring is Associate Professor of Sociology at East China University of Science and Technology in Shanghai. His research concerns transformations of personal life under conditions of globalisation and rapid social change. In this context, he pursues two lines of research. One is concerned with experiences of transnationalism among the highly mobile highly skilled. In this context, he has conducted research on Chinese-Western transnational families in China and in the UK, and he is currently in the very early stages of a new project on Western academics of migration and career formation in China. Second, his work is concerned with the transnational production, circulation and consumption of psychotherapeutically informed discourses and practices of personal life. He has is a founder and convenor of the international academic network Popular Psychology, Self-Help Culture and the Happiness Industry, and he is currently working on the Handbook of Global Therapeutic Cultures (Routledge, 2020) and a research project on the commodification of mindfulness medication. He is the author of five books, including Therapeutic Worlds (Routledge, 2019) and Transnational Popular Psychology and the Global Self-Help Industry (Palgrave Macmillan, 2016), and his work has been published in international journals such as Consumption Markets & Culture, Modern China, and Sexualities. 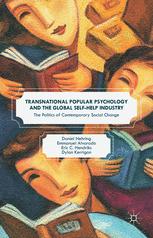