Yang, P. (2018). Compromise and complicity in international student mobility: the ethnographic case of Indian medical students at a Chinese university. Discourse: Studies in the Cultural Politics of Education.  http://www.tandfonline.com/doi/full/10.1080/01596306.2018.1435600 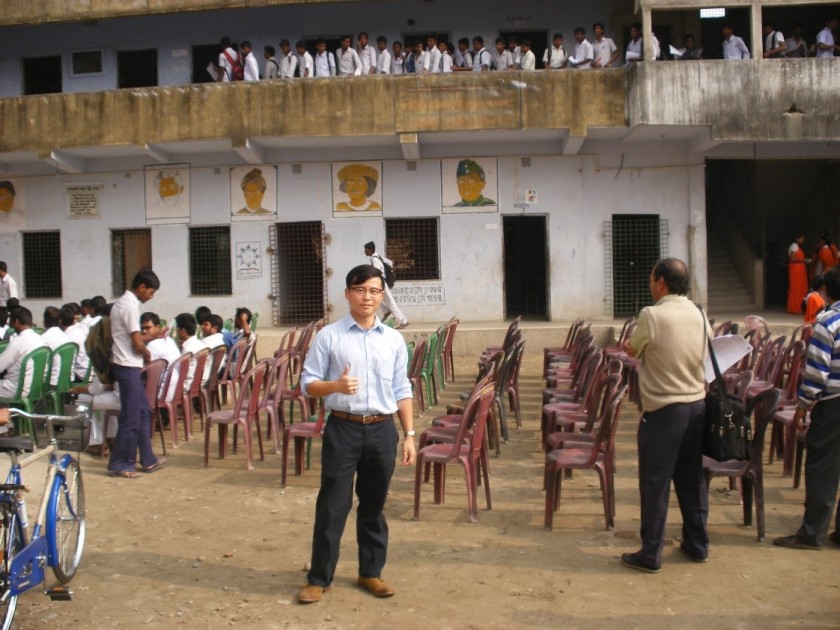 Existing scholarship on international student mobility (ISM) often draws on Bourdieu to interpret such mobility as a strategy of capital conversion used by privileged classes to reproduce their social advantage. This perspective stems from and also reinforces a rationalistic interpretation of student mobility. A shift of focus to interAsian educational mobilities involving non-elite individuals and institutions can reveal logics of behavior and of social interaction that are at discrepancy with the dominant perspective, thereby advancing the theorization of educational mobilities. This paper examines a case of Indian youths of less affluent backgrounds pursuing English-medium medical degrees (MBBS) at a provincial university in China. Through ethnography, the paper illustrates how various parties – individual, organizational and institutional – to this somewhat ‘unlikely’ project of knowledge mobility follow the discrepant logics of compromise and complicity to seek to realize their educational desires, social aspirations, and organizational objectives amidst realities of class disadvantage and resource inadequacy.

Indian students started heading to China for MBBS in their ‘hundreds’ since early 2000s (Aiyar, 2006). As of 2015, the majority of the 16,694 Indian students in China (CAFSA, 2016) can be assumed to be on MBBS programmes, although no precise statistics seems available. Students from India are very likely the largest single-nationality group among foreign students pursuing English-medium MBBS in China. In recent years, China has also become the top destination for Indian students seeking medical training abroad (Mishra, 2012).

Prevailing theorization of ISM tends to employ a Bourdieusian theoretical framework and assumes mobility to be ‘overwhelmingly pursued by privileged individuals’ (Waters, Brooks, & Pimlott-Wilson, 2011, p. 460). The underlying logic of ISM, according to this dominant perspective, is about using study-abroad as a ‘social alchemy’ to realize the conversion between economic, social and cultural capitals, thus ultimately to reproduce class advantage.

The case of Indian MBBS students in China raises numerous points of discrepancy with this prevailing narrative. Most Indian students I encountered during my fieldwork at a provincial university (pseudonym ‘CNU’) in southeastern China came from non-affluent families in small-town or rural India. They belong to the emergent lower middle classes in India, with little true class advantage or ‘eliteness’ to speak of. Their destination – Chinese provincial capital city ‘CN’ – lies outside the coveted global spheres of elite knowledge production and circulation. There was also limited evidence that their India-to-China mobility would eventually generate any meaningful ‘cultural capital’ for them.

Thus, my paper sets out to understand and articulate the logics or rationalities underpinning such a ‘discrepant’ case of ISM. In a nutshell, I argue that the mundane thought processes, decision making, behavioral patterns, and social interactions of the various parties to this case can be understood in terms of what I call the logics of compromise and complicity.

The study is based on three short but intensive ethnographic fieldtrips conducted in China and Indian over 2014-2016.

The term ‘compromise’ captures the very preconditions of this case of ISM, which in turn underpin various actors’ behaviours.

With government-subsidized public medical schools being extremely competitive while the private alternative extremely expensive, coming to CNU, China for MBBS could be understood primarily as a compromise made by a group of Indian doctor-aspirants who are academically as well as financially excluded from medical education in India.

One manifestation of this state of compromise was the manner in which my Indian informants and their parents settled upon the destination country and institution for study. Contrary to an informed, calculative and careful decision-making process that a rationalistic interpretation of ISM tends to portray, my informants’ choices were often made in a haphazard way, shaped by elements of chance and contingency. Many of them admitted to having, to greater or lesser extent, made ‘blind choices’ when deciding upon coming to China for MBBS, and in choosing institutions.

On the other hand, it was found that CNU’s international MBBS programme suffered from serious issues with regard to admission screening and programme quality. In my ethnographic field trips and interactions with the Indian students, I encountered multiple instances – some of which rather unsettling – that indicate this provincial Chinese university’s own compromised situation as an educational provider.

In short, for tuition fee revenue and supposed prestige of ‘internationalization’, CNU compromised its admission standards to accept Indian students (among other nationalities) who were themselves operating on a logic of compromise due to their own lack of choice. Meanwhile, owing to resource inadequacy and lack of preparedness, CNU was only able to offer an education of clearly compromised quality.

Borrowing this anthropological notion of complicity, I argue that the various parties to the India-to-China MBBS project at CNU can be regarded as forming a community of complicity of sorts. Here, complicity entails embarrassment that is mutually known, but unspoken to preserve the veneer of normalcy and respectability. Its ultimate aim is mutual accommodation and conflict avoidance.

Between the Indian MBBS students and CNU, complicity manifests in a mutual silence about each other’s compromises, which serves to sustain this otherwise precarious educational project. Put bluntly, the Indian students refrain from complaining about CNU’s problematic programme because they are acutely aware of their own lack of choice. On the other hand, equally conscious of their mediocre institutional standing and resources and the lack of readiness in running medical education in English, CNU sometimes uses measures such as leaking exam questions to help students progress in their studies instead of insisting on academic rigour. Maintaining this mutual complicitous silence helped both parties avoid situations of awkwardness and potential conflict where both parties could be greatly embarrassed or indeed provoked should their respective compromises be exposed.

Between the students and their parents, complicity manifests in a mutual silence and a lack of communication about the problematic realities of their MBBS programme in CNU China. Such a silence or lack of communication is difficult to comprehend considering that parents have invested heavily into the students’ education despite humble family socioeconomic circumstances. Drawing on Jakimow (2016), my interpretation in this paper is that the Indian students and their parents are locked in a complicitous relationship vis-à-vis each other so as to preserve the appearance that each is fulfilling their moral obligations to the other. This precarious mutual performances of moral duties – for parents to give their children a chance at social mobility by sponsoring their education and for children to study hard to realize that social mobility by becoming doctors – could only be preserved in this case through a complicitous silence about what actual went on in the programmes at CNU.

Finally, between the students and the educational intermediaries, complicity manifests in the otherwise surprising ways in which the problematic reality of the India-to-China MBBS programme never seemed to affect a cordial – sometimes even familial – relationship between the two parties. Their relationship seems far from a legalistic one between the customer and the service provider where the paying customer supposedly has the upper hand. It is argued, the students (and their parents) can be regarded as somewhat complicitous in their weak position vis-à-vis the intermediaries, thus allowing the latter to profit from their compromises.

Aiyar, P. (2006). Made in China Indian doctors.   Retrieved from http://www.thehindu.com/todays-paper/tp-opinion/made-in-china-indian-doctors/article3134132.ece

Peidong Yang (DPhil, Oxford) is a Lecturer in Humanities and Social Studies Education at the National Institute of Education (NIE), Singapore. His research interests are located at the intersections between education, migration/mobility, and media. Past and present research projects include Singapore’s “foreign talent” policy in relation to Chinese students’ international mobility; immigration tensions and immigrant integration in Singapore; Indian medical students in China; and cultural analysis of (online) media memes in contemporary China. He is the author of International Mobility and Educational Desire: Chinese Foreign Talent Students in Singapore (Palgrave, 2016) and more than a dozen international peer-reviewed journal articles and book chapters. At NIE Singapore, he teaches courses on identity, globalization, and sociology of education to student teachers. www.peidongyang.com

One thought on “Compromise and complicity in international student mobility: the ethnographic case of Indian medical students at a Chinese university”